December 24, 2008
i told the senorita that i wanna be more structured in my blogging in 2009. she asked me what do i mean by that? well basically i wanna write more and be more structured with my postings. again what the heck does that mean? i told her that since i started blogging in 2002, i've possibly come up with 20% crap, 30% life experiences, 15% footie and 35% angau. i made the percentages up of course. if i were to draw up a timeline of the things that i blogged about over the years, it pretty much sums up the circle of life in general. i started blogging when i was in a relationship. i went through a relationship crisis and i used the blog to vent out some frustrations. i found the senorita through this blog and the whole blog world joined in my celebration of the arrival of little jj.

in the midst of all that there were some seriously vomit inducing lovey dovey angau entries. some random observations on the state of the world and a whole lotta crapola. the blog also saw arsenal win the premier league and remain unbeaten for the whole season. and the blog also saw the gunners blew their chance at european glory by losing to barca in the champion's league final.

clearly there's not really any structure to it.

i'm wary of changing things jugak tho. remember what metallica did with saint anger? that album lacked the edge that kirk hammet's guitar solos provided in all their other albums and it kinda sucked. hehe but look at them now with death magnetic. hehe. so i don't wanna be changing much till just an unrecognizable blob of acat is left.

the senorita would probably be happy if i were to just write more often aje kot..

but not THAT happy if most of the entries are about footie and gadgets and stuff.

slightly happier if i become all intellectual and discuss current economic and political events. and she can flash her boobs to distract me if i start to ramble on at home - which i loike. ;)

infuriated if i write anything mentioning MAYA KARIN

but then i've always written what i want and i've stuck with that all this while. the question now would be what the heck do i wanna write about?

so i guess 2009 would be a good time to start finding ur foot again in this ever expanding blogosphere. there's a lot of new well written blogs cropping up here, there and everywhere. and it's really interesting to read the different styles of writing and humor. hehe lets keep the original ideas coming eh.

here's a tip for new bloggers; whenever u come up with a piece, that's not about your life per se, or an observation or whatever views that u have about something, anything la, the only way for u not to be branded as a plagiarist is to quickly google the topic ur doing, see the results and if there's any commonality with any of them and just do a mention at the end of ur blog. coincidences happen. the senorita and i did a little experiment in trying to come up with a name for her secret project and it turns out that some of the ideas have been thought up before. so u either give credit or move on to the next original idea.

life is like that. experiences repeat itself. different people experience the same thing and if u get two bloggers blogging about their lost love - how different can u expect the entry to be like?

i am digressing. so back to the whole wanna be structured du da. hehe the senorita says, hmm, good luck. she's not that optimistic. seeing my tendency to just post pics of little jj when i have nothing to blog about. we can probably expect more of that la kot. hehe macam this one.. 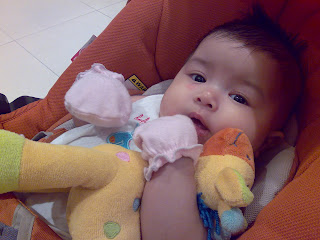 Popular posts from this blog

January 04, 2017
That was a brilliant game if you're a neutral. Not so much if you're a Bournemouth fan or an Arsenal fan.
Giroud completed the comeback but it was a game that we should have played better. Still no Özil in the side. Bournemouth looked the better team from the start. Ref was pretty much spot on with some of his calls. The red card kinda swung the game to our favour but we never really capitalised as we still allowed Bournemouth time on the ball even with 10 men.
But I guess it was 1 points gained instead of 2 points loss.
Here's hoping for a draw tomorrow for the spuds and Chelsea game.
Post a Comment
Read more

January 02, 2017
2017 is here. After that very eventful 2016 one can't help but hope that the new year brings about more positive things. It doesn't look all that good though.
Will we get an election this year? I'd seriously consider it if I was the pm. I mean yes he has go a lot going for him but what he doesn't have at the moment is a credible United opposition to give him a run for his money. So yeah. Calling for an early election may be something that can be to his favour.
Will stupid acts by stupid people stop making then famous? Nope. Early on we saw a bunch of kids scaling the IPOH sign for shits and giggles. Posted everything on social media. Last I heard they've already come in to give statements to the fuzz. So the moral of the story is if you wanna do stupid things don't blab on social media with your smiling mug there for everyone to see.
Pump prices are up. No point complaining anymore since the price mechanism is partially public so we can pretty much guess th…
Post a Comment
Read more

Of drivers and motivation.

June 04, 2014
You often wonder why folks behave the way they do. What drives them and why they behave inexplicably different from what you expect it them. You like to think that there is an element of commonality in human behaviour when it comes to certain things. Things like common sense and decency. Things involving ethics and moral behaviour.
You would like to think that there is a baseline that people thread on and you can count on them to toe the line.
You would like that very much.
But the reality of it all is much different. We are all driven by different things. There's that element of unpredictability in each one of us that allows us to surprise people every now and then. The more we expect people to behave a certain way, the more likely it is for us to be surprised when they actually do the opposite.
Maybe we shouldn't even bother. Let's just factor in all the uncertainties in life and just focus on what we can control. Yep. Let's just concentrate on our own action and beh…
Post a Comment
Read more